This was essentially our final in School of Rock class. We were supposed to download a zip file that contained three midi’s and a ton of awesome soundbites that included EDM traps, Dubstep Rides, House Snares, and a ton more. The midi’s as well as all the soundbites were put together by a student in our class. We had to use the provided soundbites and at least one of the midi’s to create a new sort of song. I created two different tracks, which is what you can listen to below.

This project was our final in my School of Rock class. We were to create a composition showcasing all of the skills we’ve come to understand over the school year: bass, melody, rhythm, and harmony. We had to make the composition be at least 8 measures long. My composition is 34 measures long, contains an intro, verse, chorus, bridge, and an outro.

When creating my composition, I wanted to start as loosely as possible. We watched a couple of motivational and helpful videos in class a couple days ago that gave tips on how to overcome writers block and how to unleash activity to be successful. One of the tips was to just create something as quickly as possible, and then make another one. So, that’s exactly what I did. I began creating random compositions and melodies, just to see if I can pump out anything that I really like enough to work on more and to up my skills.

Reactions to the Final Version

“I liked it, I imagined waking up in outer space and seeing a cat puke a dog – in a good way.” – Ja’Ron

Evaluation of the Final Version 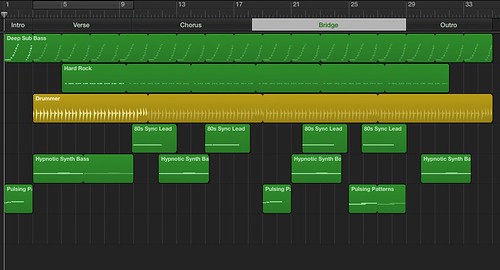 For my composition, I used a lot of drum kits and synthesizers. I used the Deep Sub Bass to create a funky bass line that continued throughout the song. I wanted the bass to be an unexpected element of the composition. The Hard Rock track represents an electronic drum kit that went very well with my drum track. There was a cowbell or a symbol sound in the Hard Rock drum kit that blended well with the drum track. You’ll know what I mean when you listen to my composition. It goes in an ABAB pattern, where two notes will play and then there will be a symbol/cowbell noise. However, it’s almost impossible to hear that there are in fact two drum tracks. These two tracks were pretty simple, and rather concrete. The 80’s Sync Leads are part of the chorus, I thought they added a funky but cool way to meld with the rest of the melody. The Hypnotic Synth Bass along with the Pulsing Patterns were my harmonic tracks that were meant to be a part of verses. I tried to structure this composition as an ordinary song, and although I’m not incredibly happy with it, I like it better than the other compositions I tried creating before this one.

This project taught me a lot about creative thinking and more about 21st century skills. I learned that by creating multiple different melodies and not sticking to one was a better process for me. I created 5 compositions in total, and I chose 1 to edit and showcase in this blog post. In the past, I had the problem of trying to perfect something, rather then ‘fail faster.’ By eliminating the objective of ‘perfecting’ my project, I ended up creating more and producing a better composition. I also have come to understand that failing isn’t a bad thing, and by failing on basically all of my created compositions for this project, I gave myself more opportunity to create more and something better.

The goal for this project was to understand the bassline and all it’s capabilities. We were given a lesson bassline by our teacher, Mr. Le Duc and we had to identify the characteristics, as in the structure and the tonic note. Then we had to list one song that contained one of our favorite basslines in it, then we also had to identify the structure and characteristics. Lastly, we had to create our own baseline using the knowledge we gained from the project. 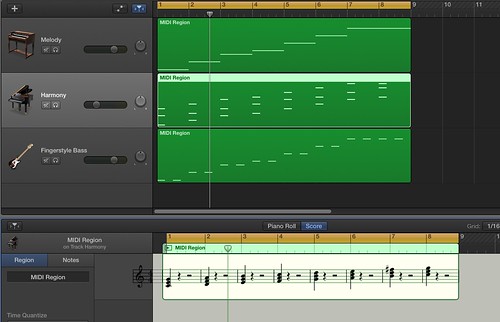 This bassline contained a tonic note of C2, in the key of C major. It, along with the harmony and melody is a constant build up of notes, going up in pitch.

One of My Favorite Bass Lines

This is a Kpop song called Doom Dada by T.O.P. I love this song, and especially the bass line. Whenever I play this song loud enough in my car, you can hear and even feel the bass booming. I absolutely love that. When I think of bass, I want to feel it.

The music video is a little funky, but I really enjoy this song and have a special appreciation for this artist. 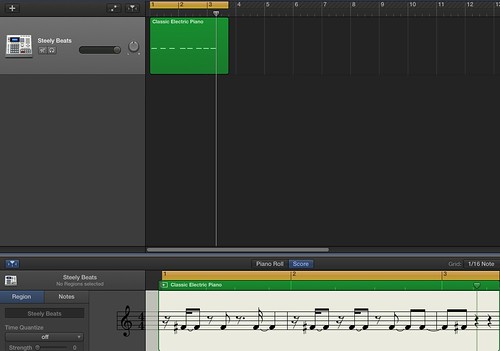 I couldn’t find a Midi file for this song, but I was still determined to use it for this project. So, I tried to recreate the bassline in GarageBand instead. It’s literally the bare minimum, and could have probably been done better, but I think it sounds similar enough to the original bassline. I used the key of C major, and I used the drum machine Steely Beats, because I wanted to get as close as possible to the electronic sound of the song. The structure of this bassline consists of a continuous note, being repeated in a specific ABAB CD ABAB CD, type pattern. I say ABAB CD, in relation to pausing and patterns. If you listen to the original song in the video above, you’ll understand what I mean.

This little piece of music that involves my base line is the same melody as the one I used for the harmony project. The only difference is I made the base line repeat itself throughout the entire song, and I made it a lot more prominent. I also lowered the volume of some of the other tracks. The base is a constant alternating change of the notes A#2 and B2. The first SoundCloud file is just my bassline, so you can hear it clearly without any interference with the rest of the music. The second SoundCloud file is the bassline as well as the melody and harmony.

From this project, I learned that bass is a lot more important than I originally thought. I understand that it has so much more potential then the little ‘boom’ in the background that occurs every couple of seconds. I also have a better understanding of the bass vocabulary, like ground bass, chromatic, and contrary motion. I also know how to better go about analyzing a bassline and how to describe it.

For this project, we had to work with the musical element of harmony. We had to take notes on harmonic terms, work with a harmony provided by our teacher, and then create our very own harmony. We also had to provide a harmony that we did not create that we enjoyed, I chose Bye Bye Love by the Everly Brothers, which you can check out more below. 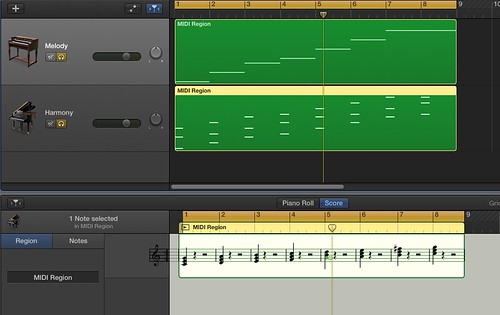 This was the melody that was given to me and my classmates. It’s in the key of C and in a basic harmony chord structure. I used it as a base to create my own harmony melody.

One of My Favorite Harmonies

The song I chose is called Bye Bye Love (1957) by the Everly Brothers. Like I’ve stated before in previous blog posts or projects, I love all kinds of music, from 1950’s to modern day, jazz to kpop, you name it. I love this song a lot, and as soon as my teacher Mr. Le Duc said to find a song with harmony, this song immediately came into my head. 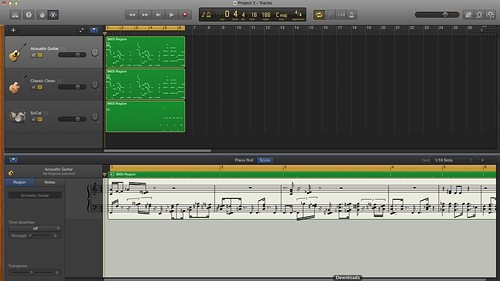 I liked this piece of harmony between the two guitars and the drum line. It flowed really well and I think executed what this project is about. It’s in the key of C major. 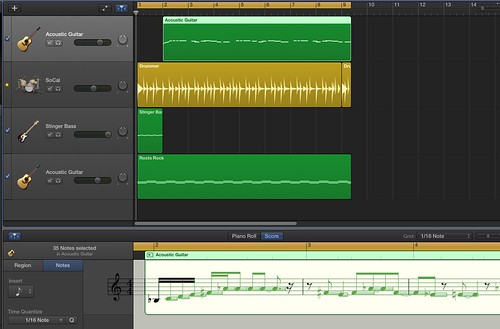 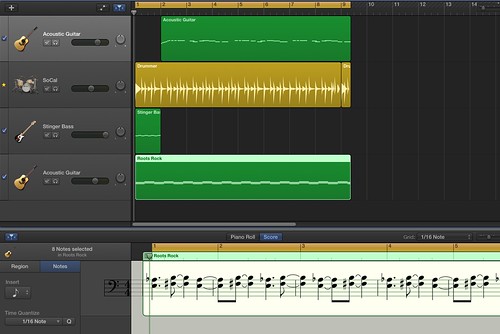 These two screenshots are the two tracks that I made the primary melody come from. The top photo shows the main melody, and then the bottom shows the simple line of notes that I found went well and sounded good with the top track. I use a lot of repetition, and the tonic note for the top track is A#2, and for the bottom it’s a combination of G#2 and E2.

I learned a lot from this project. I enjoyed building my own harmony, and understanding more of the complexities of this musical element. I also understand that harmony can be extremely simple too, as in, someone can be singing a song and playing a guitar, and that’s a method of harmony. I have better knowledge when it comes to harmonic terms as well. Like, before I didn’t know that there was multiple meanings to words like triads (major, minor) and other key words like chord progression. 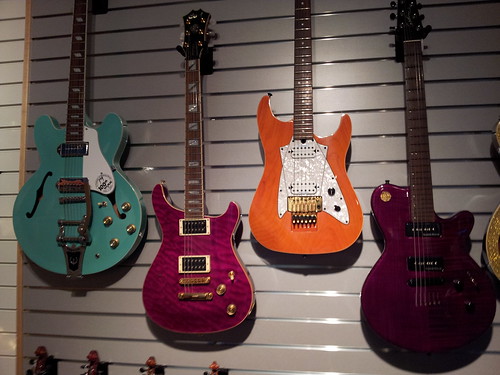 For this assignment we were given a clip that my teacher recorded to try and replace the audio. This process was suppose to replicate ADR (Automated Dialogue Replacement). I was given a video clip and an audio file containing five different versions of Le Duc saying “I never said you stole the money.” I imported all of these files into GarageBand and replaced the original “I never said you stole the money track,” with a different one, along with adding a track of ambient noise.

Here is the clip that we were given to work with, it’s our teacher saying “I never said you stole the money.”

Here is the clip with my ADR work done on it, along with a track of ambiance. All I did for my ambient track was use my Apple iPhone Voice Memo microphone and recorded for about 6 seconds while the classroom was working. I picked up some background noises that included conversations that aren’t exactly audible, and the ventilation rumble.

Here is the clip that I made, using ADR to replace Le Duc saying “I never said you stole the money” with my own voice. I also left the ambient track in this clip as well. 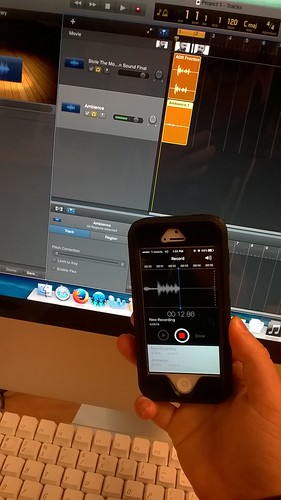 Here is a picture of me recording myself saying “I never said you stole the money” to replace the the former audio. Also, there is my screen, indicating my work in GarageBand.

1970s and Onwards: Innovation in Popular Culture – Around the World Notes 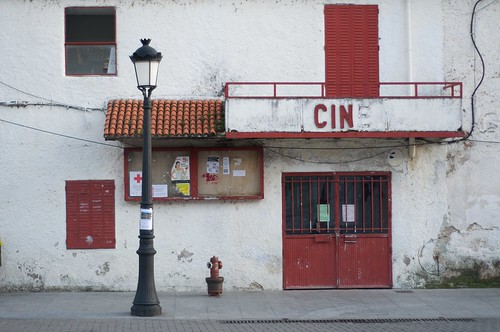