This project was the process of analyzing an assigned clip from the movie Citizen Kane, and film an interview talking about that clip and how we analyzed it. To create this interview, however, we had to break the creation of it up into three weeks. This week is primarily writing the script, scouting the area, working out lighting and camera angles, and doing research. Next week is filming week, and then the week after is the time to edit the video together. That is my job, I am the editor of the film.

Influences From Editors, Films, and Other Research

A good video explaining some of the equipment to use to achieve an interview with good audio and lighting.

The video below was using Final Cut Pro to edit their video, but they still gave some helpful tips and information that I could use in iMovie.

Planning with Cinematographer and Test Shots

The cinematographer and I discussed briefly about how we want the interview to go and how it should look. We came to the conclusion that we want at least two cameras on the person being interviewed. Both of the cameras will be still at certain points of the video, and focused on him at different angles, and then the cinematographer talked about moving one of the cameras, so it will be panning around our interviewee to create a whole new effect.

Day 1 (Tues. 1/4/16): Writing prep for the screenplay, we will be hashing out the main theme and idea of what the interview will be like and how the screenplay will go. Location scouting and lighting check. Lastly, researching our roles to have an idea of what we need to do.

Day 2 (Wed. 1/5/16): We will be writing the basics of our screenplay so that we have room to edit it during filming. Locking down our filming location. And finally, continuing research for our roles.

Day 3 (Thurs. 1/6/16): Testing lighting and cameras in our film location, getting everything ready for filming. Completing the screenplay, we’ll just have a rough version of it. More research for roles.

Day 4 (Fri. 1/7/16): Finishing prep for the actual filming process. Editing the screenplay if needed. And even more research for our roles.

Day 6 (Tues. 1/12/16): Continue filming, completing at least a quarter of the filming, if not more. Again, making revisions to the screenplay when needed.

Day 7 (Wed. 1/13/16): Completing half, if not more of the filming. Making more screenplay revisions when needed.

Day 8 (Thurs. 1/14/16): Complete the filming the filming. If it is already finished, then refilming in case there are any problems, or we need to fix any problems.

Day 11 (Wed. 1/20/16): Continuing editing process, completing at least half of the final project. 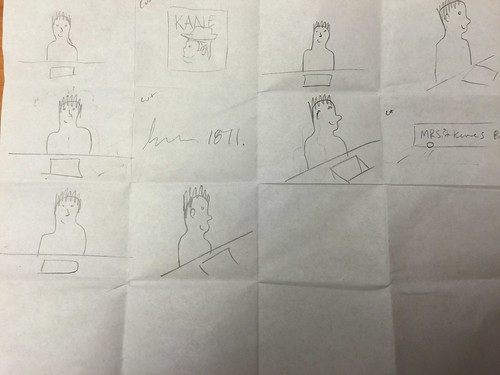 I learned a lot about certain editors in the film industry. I discovered that a lot of movies that I really like have been edited by similar and or the same people. This was interesting to me, and made me think ‘no wonder I like these movies, even though they are nothing a like. The editors and directors were similar or the same.’ I also learned a lot more about editing techniques. Adding cutaways, or breathing room can be crucial in a good video, especially if it’s on the longer side and you’re looking to keep your audiences attention. One of the problems that I solved was the issue with audio and syncing it up to the clip when cutting away.