For the second week of the project, The Art of the Interview, we had to dive right into filming. My teammates and I used two cameras at two different angles to film one subject. That subject was Scott, and he was discussing analysis on the movie Citizen Kane. One of the cameras we used had a Vintage 50 Manual lens, and the other was a Canon EF 50 Prime lens. Since I am the editor for this project, there wasn’t much in the way of editing for me to do. So, I contributed to the filming process a lot.

Collating Rushes from the Filming 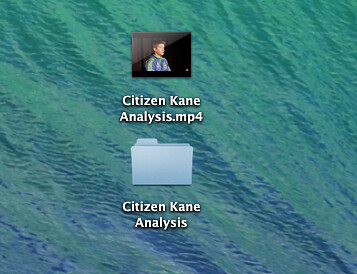 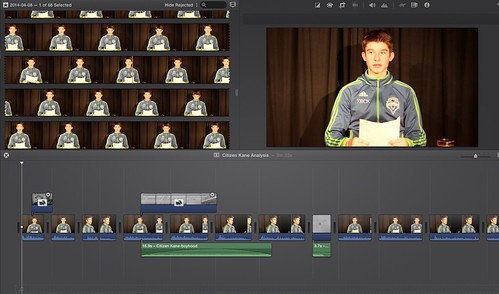 These two images are my evidence for storing the footage that we took. I had a folder that was specifically for all of our footage, and when I was creating the actual film in iMovie, I had all of the footage we took in the library section, so it was easily accessible. I have the folder labeled ‘Citizen Kane Analysis’ for an easier way to find the footage.

Contribution to the Shooting 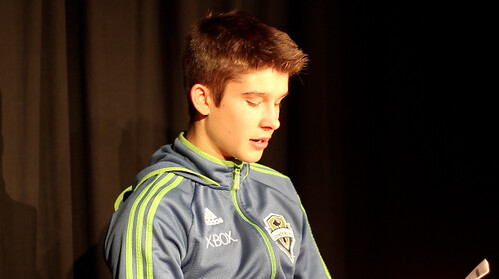 I helped Kameron film by controlling the second camera. I was in charge of the Canon camera with the EF 50 Prime lens. I sat on the left side of Scott at an angle, as you can see from the picture above. 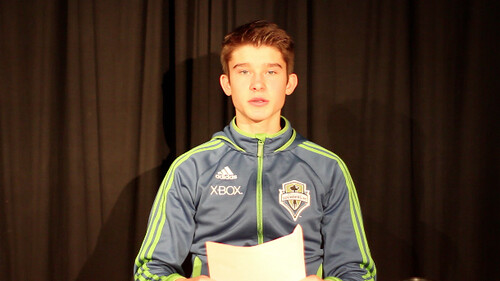 Kameron was in charge of the other camera, the Canon with the Vintage 50 Manual lens. He stood facing Scott straight on. We worked together by giving each other a hand signal when we were both ready to begin filming, or stop filming, etc.

One of the problems we had was lighting, it looked a little different in both cameras. One image would be a bit brighter and the other image may have been a little darker or discolored, as in the image had an orange tint. We fixed this by working with the brightness and color settings in iMovie, we matched each image to have the same brightness and color. We also the same sort of problem with audio. The camera that Kameron was in charge of picked up Scott’s voice more than mine, so when we played back the video, it was quieter on my end. We solved this problem in iMovie as well.

Assistance Given to the Production Team

I gave Kameron and Scott my input on each scene and different cuts I thought would work for our final video. We all took each others ideas and created a final screenplay that we all thought worked. I also helped Scott find a better way to read his script without too many errors in pronunciation and without looking down at the paper too often. lastly, I helped Kameron film all of the footage we got.

From this stage of the project, I learned a lot more about the cameras. I learned that if you have two different cameras in two different places, you may end up with problems involving lighting and audio. But I managed to fix those problems rather easily in iMovie, which was helpful. I also learned a bit about the lenses and the types. Lastly, I learned a lot about editing techniques that I’m really excited about.