These last two weeks of the project were my weeks to shine. I was hands on in iMovie working and creating, mixing and matching clips to pull the film together. As the editor, I worked to create the final product.

Kaitlyn and I both took on a shared role as director. Since there was only two of us, it was easy to work together and capture images and edit clips down so that we were both happy. As I worked in iMovie, Kaitlyn would sit by me and we would both discuss which scenes should go after others, and how things should be sequenced so that the film made the most sense and as beautiful as possible. 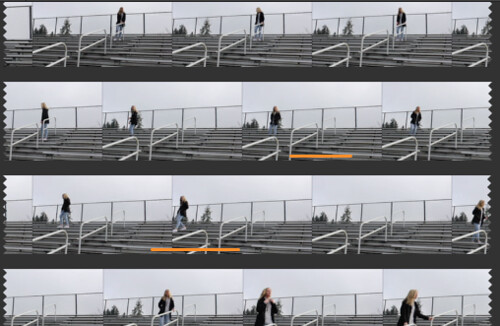 This is actually a clip that made it into our film. It’s just an original raw video that was not edited down. When Kaitlyn and I were out filming, she had walked up on the bleachers and I immediately got the idea for the jump-cut edit. I had her walk all over the bleachers in a random pattern, and once in iMovie I cut four pieces out of the video and then put them back to back. This created a sequence of jump-cuts, that I absolutely loved.

Here is a screenshot of a clip that I actually wanted to use, but couldn’t due to some of the quality. It is a video of Kaitlyn and my friend Rose, doing sign language. I wanted to use this clip during a point in which one of the audio tracks had someone speaking about learning languages. However, if I wanted to use it then I would have to cut down the clip until there was barely nothing, because at one point, a woman runs behind Rose and it distracts her. So the only bit of the actually sign language I would have been able to put in the film would have been about 1.2 seconds, and that didn’t feel long enough to me, so I cut it out completely. 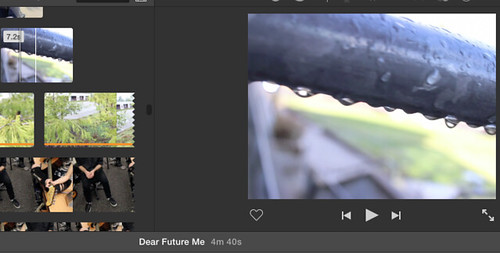 Here we have a clip a railing covered in water, it only consists of a tracking/panning shot down the railing and focusing on the water. I wanted to use this clip as well, but didn’t end up having it in the final product. I didn’t, because the clip was a bit out of focus, and the camera wobbled quite a bit, to the point of it being distracting. 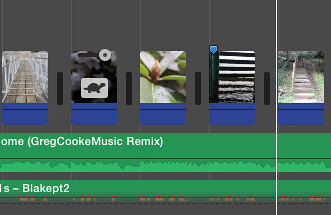 Our entire film was a serious of jumpsuits and a few dissolves. These five clips were sequenced in a cinematic way. We had my audio track begin, and with it we view a bridge/pathway from a downward view, then we cut to a blurry clip of flowers that gradually focuses. I had to slow the clip down, so it lined up with my lines “did you do anything about your flower obsession?” The following clip is of a flower bud, to tie in with the previous clip. Skipping over the next clip, we have another clip of a pathway, this time panning slightly upwards, to tie these clips together and refer back to the beginning clip.

Contributions with the Director 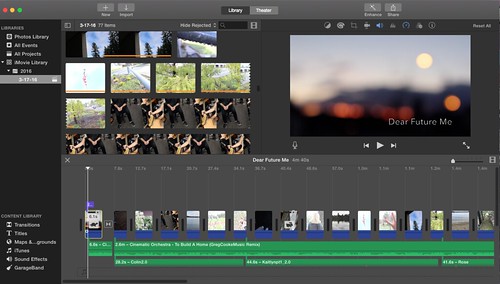 I mainly used iMovie to put this film together. I had over 70 clips imported into it and I worked from there, cutting and trimming and putting all the pieces together until I got what you see above. 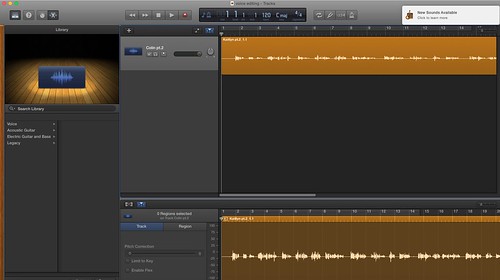 As for audio, I had to work in GarageBand a few times to fix things. Some of the audio tracks were too quiet, and even if I raised the volume in just iMovie, they were still too quiet. So, I imported some of them into GarageBand and raised the volume until it was at max. Also, there were some tracks that needed to be cut in some places, and GarageBand is a much better and easier place to do that in than iMovie.

How I Could Have Improved the Film

There isn’t a lot I would change about this film, other than changing some scene sequencing and fixing some audio in certain places. I’d want to change scene sequencing because I feel like I could have moved things around so that it played out in a more cinematic and correct way. As for audio, there was a point in the film where the first couple seconds of someone’s lines being overly loud, and although it levels out, I still feel like I could have fixed it, I just didn’t catch it before the deadline rolled around.

When it comes to editing or using the cameras, those were things I knew well. But, there was something new and valuable I did learn from this project: time management and proper planning. Kaitlyn and I were not good planners, sadly. We changed our script about two or three times, and we took way too long to actually get going. We were already off to a bad start when it came to managing our time wisely. Also, with me being gone for a whole week did not help at all. Once I came back, we did work very hard and got a lot done. More than I thought possible, in the timeline and attitude we had. Both of us were frustrated and paying the price of our mistakes. Usually, I make a day by day timeline for projects, explaining in detail what will get done each day leading up to the end product, I did not do that this time. And I learned how important that timeline is, and I will never not do it again. Kaitlyn and I both have learned from our mistakes and will not make them again.